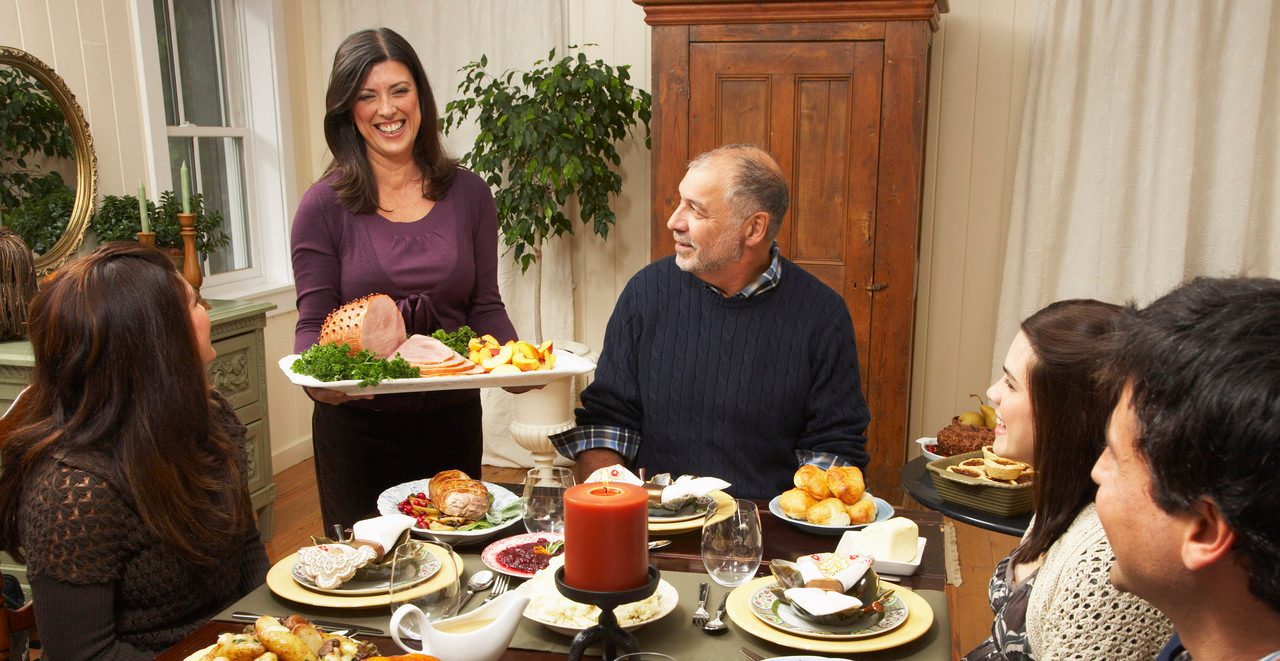 You don’t have to starve after the splurge.

Our image of the fall and food looks like this: Around Halloween, bowls of candy appear in lobbies and office meetings. A month later at Thanksgiving, you sit for the entire afternoon with your family stuffing yourself to match the turkey and carry home rich leftovers you eat for days.

Then there’s a solid month of parties, with cheese, nuts, candy, and cake even at less formal gatherings. At the bigger events, waiters scurry around with platters of high-cholesterol appetizers, and you’re plied with liquor. By the end of December, you’re already full when you sit down for a Christmas Day dinner. New Year’s Eve, a night of high-calorie drinking, is followed by a day of party eating.

So we tend to believe reports that Americans gain 7 to 10 pounds over the holiday season. Happily, that isn’t true, a well-designed study reports. When researchers measured the body weight of 195 men and women over the course of the year, they found an average weight gain from mid-November to mid-January of less than one pound. Less than 10 percent of the participants gained 5 pounds or more.

It’s true that people eat more in large gatherings and with family especially. But many people don’t spend the holidays this way — families in America are changing. Some of us don’t have children or live far from family.

If you are facing a couple of months of eating temptation, you might try out these strategies:

1. Think about what you’ll eat in the hours before a big meal. Some people skip breakfast and lunch or keep it very light if they know they’re heading into a big dinner. Does that work for you? You may well just eat more at dinner. If you know that’s the case, eat a breakfast with protein.

2. Decide in advance how much liquor or dessert you’ll eat on any given day.

3. If you’re going to a pot luck affair, bring a dessert you enjoy based on fruit with less sugar and fat than the typical pie. Or bring a vegetable dish.

4. When you’re the host, don’t put food on the table within reach, but instead serve each person and then put the dishes in the kitchen. Also use smaller plates and invest in plastic containers to give away food or freeze it, so you don’t feel you have to finish leftovers.

Some of us swear we’ll shed holiday pounds with a juice fast and new gym membership after New Year’s. But that’s likely to back-fire, especially if you beat up on yourself, says Alexis Conason, author of the “Eating Mindfully” and “Anti Diet” blogs and a research associate at the New York Obesity Nutrition Research Center: “Self-blame is just a fantasy that you can reverse the damage by telling yourself you’re horrible, weak-willed, or lazy,” she says. “It won’t work.” You may just end up overeating again sooner.

Instead, ease into healthy eating. The day after Thanksgiving — or another group binge — she says, stay away from the scale. Don’t fast or run like a rat on speed on the treadmill. Instead, try calming your stomach by drinking some chamomile or peppermint tea, eating a series of small meals that include lots of vegetables, and treating yourself to another activity that makes you feel good, like a bath or yoga class.

“Treat yourself with compassion,” says Conason, who doesn’t believe in punishing diets any time of the year. “I encourage people to eat whatever they want all the time. Ironically when we do that we start to pay attention to what we actually want and listen to our bodies.” Other weight loss experts advise adopting some habits that feel like a plus, rather than a deprivation. People often confuse thirst with hunger, so you might drink water before you grab a snack. Try drinking water or unsweetened iced tea before a meal. You might eat smaller meals five times a day, and make sure they’re enjoyable. Or buy new spices and experiment with new dishes when you cook at home. Spices can make food interesting and feel special, without adding any calories.