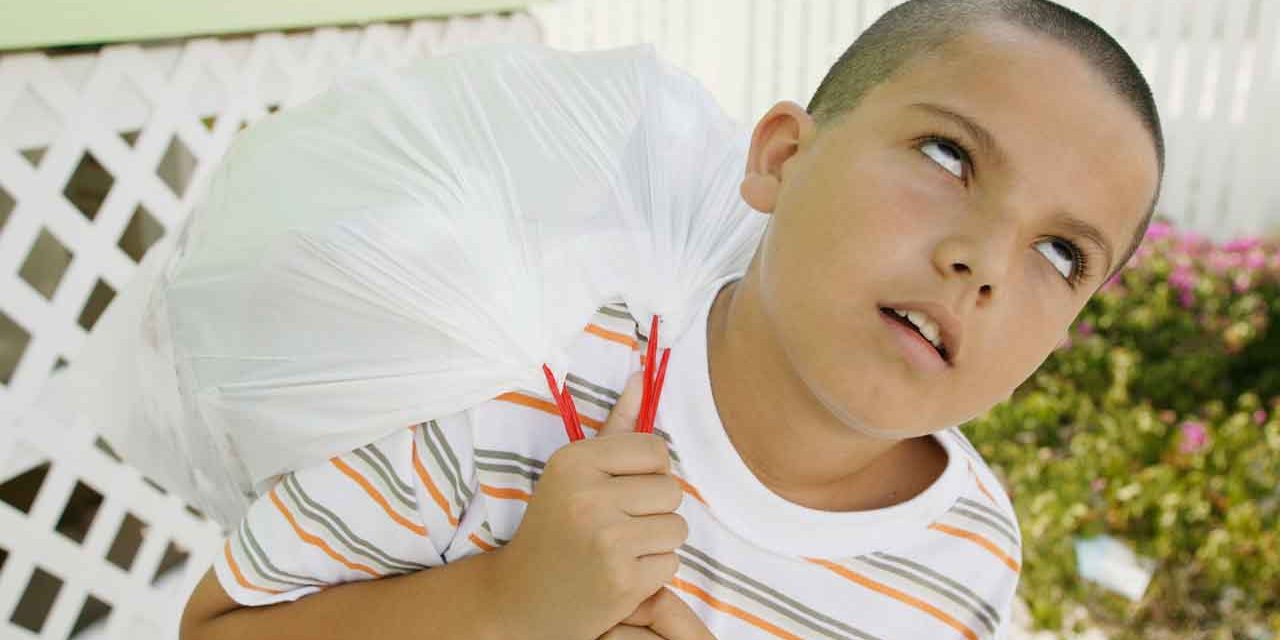 Most of today’s adults grew up doing chores. A recent survey indicated that 82 percent of parents reported regular chores during their childhood.

Most of today’s kids are not growing up doing chores. That same survey revealed that only 28 percent of the kids of those parents do chores.

What’s responsible for this change across generations? There are a few factors that get cited and make sense, and I’ll focus on two. First, kids today – ranging from toddlers to teens – don’t have as much free time, with lots of filled-up schedules and structured activities (not to mention growing homework loads). Second, this trend toward what many experts believe is “overscheduling” reflects the thinking that kids should be spending their time getting “good” at things (hence all the scheduled activities) that will make them competitive in the near and far future. Thus it’s more important to go from music to sports to homework, with a little time thrown in for dinner, rather than just hang out at home and help to clean up after dinner.

So what’s the problem? The problem is that regular participation in chores offer lots of benefits that play out across development. Many of these have been summed up before and can be summarized as follows:

Chores develop social skills. We think about chores as promoting self-reliance, which is true (see below). The earliest roots of chores should come from being a member of a family and the growing sense that everyone contributes to make life better for all. Young kids learn how they can contribute, and that serves as a social reinforcement (more on that below). We learn that we do in order to do for others. This is perhaps the biggest developmental lesson that can be learned from doing chores and the least appreciated. It becomes clearer though when we start talking about how kids are growing up “entitled,” which typically means that they think the world owes them everything and they owe the world nothing. That doesn’t play so well when you get out into the world, and you don’t want to take on all the “dirty” jobs that are required to be successful within the context of a work environment. It won’t matter how much talent a kid has and what credentials they’ve racked up if they aren’t willing to grunt out the unglamorous parts of the job, a rule that holds for any competitive field.

Chores develop self-reliance. This point does not contradict the messaging on social skills. As kids competencies grow, they get to that point where they do become able to take on chores, or aspects of chores, on their own. They learn how to do for themselves as a corollary to knowing that they shouldn’t expect everyone else to do for them. Chores contribute to the development of conscientiousness and a strong work ethic. This plays out by being predictive of better academic and professional success across decades.

These reflections suggest that chores are really important for kids, and depriving them of the chance to do them regularly cuts off opportunities to build social and personal skills that predict success. That should assuage concerns that all those other activities are “more important” than helping to clean up around the house. But that raises a different question: HOW do we get kids to do chores? There are a few points to consider.

Stop saying and acting like you hate chores. Acting like chores are the worst thing in the world is not an effective motivator for engaging kids at any age. Who wants to be told that there is something really lousy that needs to be done and no one wants to do it, so … guess what, you have to do it! Even if a kid does them it is just compliance and probably not the platform for learning social skills and self-reliance. So while you don’t have to act like you love chores, you shouldn’t indicate that you hate them. In fact, remind yourself that you do them to make your life, and the life of your family, better.

Ask kids at any age to help. Rather than telling a kid they have to do something, ask for help. Kids are natural helpers, especially at very young ages. They like to be asked to help and given a chance to help – many times they are looking for it. Figure out what they are capable of (you know them better than anybody, so don’t go looking for those age charts), and ask them to pitch in. Does your 3-year-old like sorting socks by color? Does your 5-year-old like to push a vacuum around? Does your 7-year-old like washing the car? Does your 12-year-old want to help prepare a meal? Find out! Just remember, give them only what they are capable of, and be ready for some trial and error. DON’T farm out a task and then get angry because they didn’t do it as well as you would. They’re not adults. Give them things they can do in concert with you to help and to build up their skills.

Don’t reward them and don’t pay them. While many may have success with chore charts and stickers and the like, research suggests that participating in chores promotes social and personal development best when there is not overt reward. In fact, some studies show that kids are less likely to help out when a reward is attached. This goes back to the idea that there is a more fundamental drive to be helpful which is best rewarded naturally – by the satisfaction of doing. Similarly, paying kids to do chores is not the most successful motivator. Getting paid to do something defines a job, and there are certainly benefits to working as kids get of age. But that’s different from doing a chore. Think about it this way. People who get ahead in their line of work often do so by taking on things that they aren’t getting paid for – and people who don’t progress may be more inclined to do only what they are told and what they are compensated for.

The bottom line is that chores shouldn’t be a chore to do. They should be a regular part of a kid’s life, cast within the broader functioning of being a part of a family where everyone pitches in as they can and works together for the better good, and serving as a platform for eventual self-reliance and a strong work ethic. And while kids may not love them, they will gravitate to them because they come with their own unique rewards.