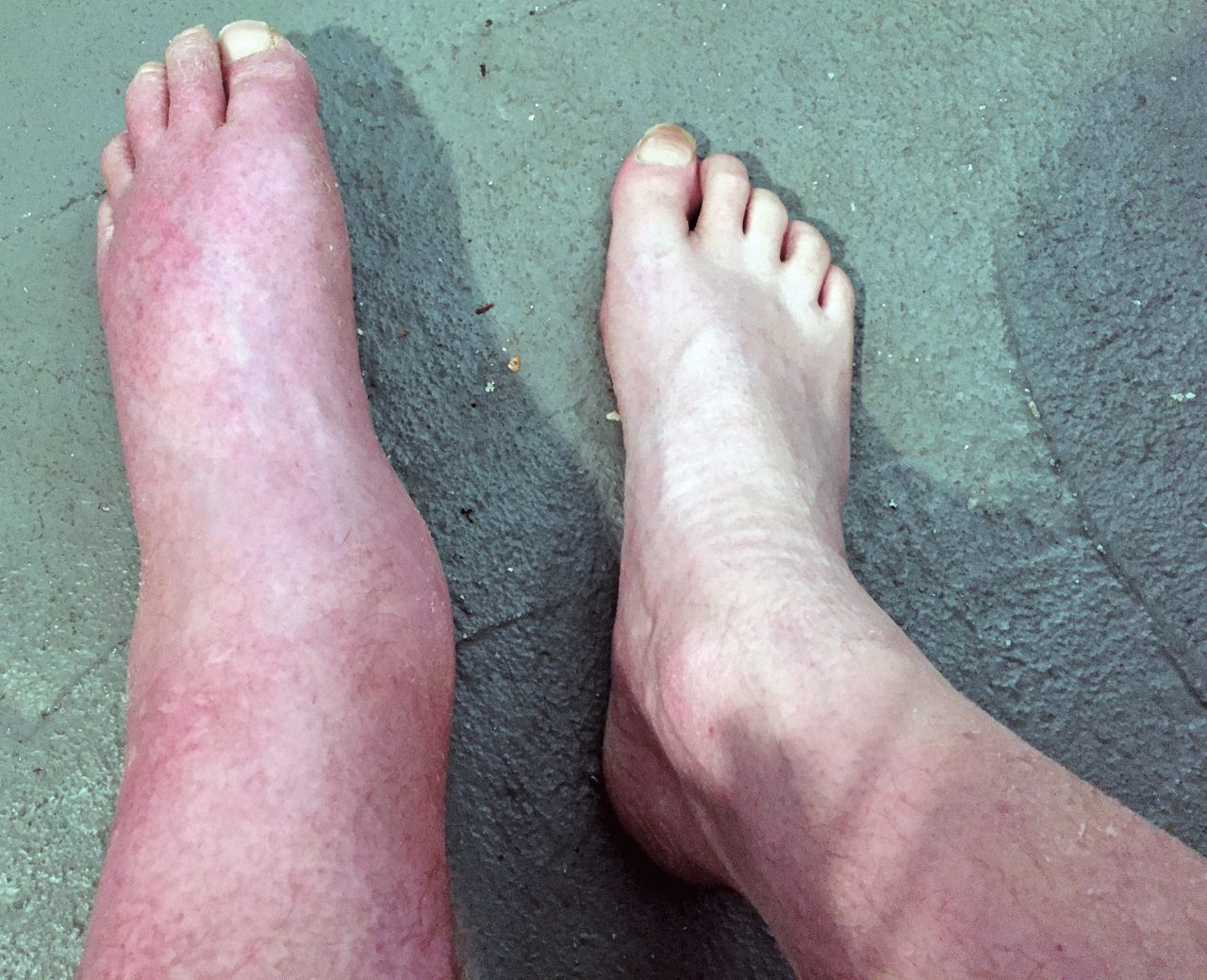 Edema means there’s excess fluid in your body tissues. Although edema can be caused by indulging in too much salty food, it may be a symptom of health problems.

If you ever pig out on super salty popcorn or use the salt shaker too generously at dinner, your face might look a bit puffy the next day. Your rings could seem a little tight, too. This is not necessarily a sign of anything seriously wrong. Instead, it’s likely that excess salt caused your body to develop a condition known as edema. Thankfully, this kind of edema goes away if you cut out or reduce your salt consumption and drink a lot of water.

Edema is swelling caused by excess fluid trapped in your body's tissues, most often in your ankles, feet, arms, hands and, sometimes, your face.

Although edema can be a harmless and transient reaction to too much salt and other reversible situations, it can be a symptom of underlying and sometimes serious health problems, including kidney disease and heart failure.

Here’s what you need to know about edema’s causes and when you should talk to your doctor if you have symptoms.

Symptoms and common causes of edema

Symptoms of edema include:

In addition to eating too much salt, there are many other common causes for mild forms of edema.

For example, most pregnant women experience some degree of edema. The hormonal changes of pregnancy and pressure from the growing baby on blood vessels are the main causes, the March of Dimes explains. Extreme or sudden edema, however, is not normal and should be reported to your doctor ASAP.

Vericose veins are caused by a weakness in the walls of superficial veins in your legs. This often results in fluid accumulating in the tissue under your skin, especially in your ankles. You’re more at risk for this type of edema if you stand for a long period of time or are overweight, according to the Merck Manual.

Being overheated can also cause edema, especially in older adults, the National Institute on Aging points out. Heat edema produces swelling in your feet and ankles in hot weather. Sitting with your legs elevated, cooling off, and drinking water can help relieve the condition. If it doesn’t bring relief, you could have heat exhaustion, especially if you feel dizzy, weak, or nauseated. Contact your healthcare provider.

Certain medications can cause edema, including some drugs used to treat diabetes (thiazolidinediones), certain hypertension medications, steroids, and estrogen for hormone replacement. In some people, non-steroidal anti-inflammatories like ibuprofen and naproxen cause the body to retain salt, resulting in edema. If the drugs are linked to edema, changing your meds can often help.

Never stop taking prescribed medications you may suspect are causing edema without talking to your doctor first.

While many common types of edema have obvious causes, don’t ignore edema if it is persistent or new. The American Academy of Family Physicians (AAFP) notes the swelling can be as benign as just sitting too long, resulting in swollen ankles. It can also indicate an underlying, life-threatening disease, such as congestive heart failure.

Congestive heart failure occurs when the heart’s lower chambers are unable to pump blood effectively. This can cause significant edema in your feet, legs, ankles, and abdomen, according to the Centers for Disease Control and Prevention (CDC). Heart failure and some other types of heart disease can cause pulmonary edema, a buildup of fluid in the lungs that typically causes shortness of breath.

Nephrotic syndrome is a collection of symptoms, including edema, that indicates kidney damage. When kidneys are healthy, tiny blood vessels in the kidneys, called glomeruli, remove wastes and excess fluid from the blood and send them to the bladder as urine. But if glomeruli are damaged by kidney disease, albumin — a protein that normally draws extra fluid from the body into the bloodstream until the kidneys remove the fluid — can leak into the urine. That, in turn, causes blood to lose its ability to absorb excess fluid from the body, resulting in edema, usually in the legs, feet, ankles, and sometimes in the hands or face, the National Institute of Diabetes and Digestive and Kidney Diseases (NIDDK) explains.

Cirrhosis is serious liver damage that can result from many causes ranging from hepatitis and fatty liver disease to alcoholism and long-term use of certain prescription medications. Edema is frequently a symptom of cirrhosis, the NIDDK points out, and the swelling is most often pronounced in the legs, feet, and abdomen.

Damage to your lymphatic system, which sometimes occurs due to a tumor or from cancer treatment, can result a form of fluid retention called lymphedema. The CDC describes lymph nodes as acting much like a drain in a sink. If the lymph “drain” is clogged in an arm, leg, or other part of the body, lymph fluid (which carries cells that help fight infections) can’t drain adequately. The result can be swelling. While there is no cure, treatments, such as massage and compression garments, can help reduce swelling and discomfort.

Bottom line? Talk to your doctor about any sudden or persistent edema

Getting a clear diagnosis of what is causing edema is important, especially if the cause is a serious, chronic condition, the AAFP emphasizes.

Treating the cause of the swelling is key. Your doctor, however, can also help relieve or reduce edema symptoms with treatments ranging from sodium restriction, prescribed diuretics and other medications, and appropriate compression garments for your condition.