Stay away from milk and wheat and eat quinoa, rice, and bananas for a helpful irritable bowel syndrome diet, also known as the low FODMAP diet. Here are some other diet tips.

Do you get symptoms similar to stomach flu — abdominal cramps plus a change in bowel movements — that wax and wane but never vanish? Do you frequently get diarrhea or constipation or both, alternating? Do you often feel gassy and bloated?

These are irritable bowel syndrome (IBS) symptoms, which might come on slowly, arrive fast for no apparent reason, or set in after an actual stomach flu or infection.

From 10 to 15 percent of Americans, of all ages, live with IBS, considered a disturbance in the way the gut, brain, and nervous system interact. Stress can trigger or aggravate the symptoms, which tend to be unpredictable, and many people who consider themselves afflicted with a “sensitive stomach” never seek medical help.

It clearly makes sense to avoid foods that trigger the symptoms, but sometimes the dangerous foods aren’t obvious.

To get clues for your own triggers, you might try the low FODMAP diet, developed in Australia, which is backed by early research. FODMAP stands for fermentable oligosaccharides, disaccharides, monosaccharides and polyols, all different kinds of carbohydrates. The idea is that these carbohydrates tend to pull water into your digestive tract and, if you eat too much, could ferment, leading to symptoms. Wheat, barley, and rye, which contain gluten, are all high in FODMAPs, which for some people may be the reason they feel better on “gluten-free” diets. They might do even better if they cut out more FODMAPS.

If you are ready to try the low-FODMAP diet plan in a deliberate way, see a nutritionist. She might guide you through four to six weeks when you restrict the high-FODMAP foods. You’ll then introduce forbidden foods one by one, keeping a symptom and food diary, so you have records of how you responded. A regime of restricting all high- FODMAP foods indefinitely could actually hurt you, changing your gut bacteria, over time, and you’ll be missing out on delicious and healthful foods. 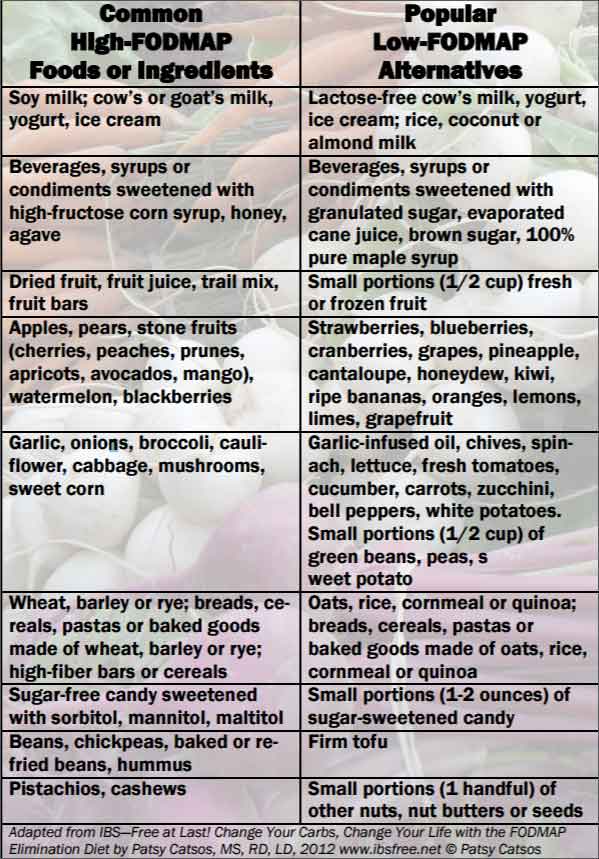 Fructose is also on the don’t-eat list of the irritable bowel syndrome diet. So the diet cuts out honey, agave nectar, and commercial products with high-fructose corn syrup, and you’ll eat products with plain old sugar instead if you want something sweet.

Dried fruit and fruit juice are high-FODMAP foods. So, sadly, are apples, pears, and fruits with stones (peaches, cherries, and avocados, for example). Instead, you can eat fresh bananas, blueberries, cantaloupe, grapefruit, honeydew, kiwi, lemon, lime, oranges, and strawberries.

The FODMAP diet cuts out many vegetables that are otherwise desirable, including broccoli and cauliflower, as well as super-healthful chickpeas, lentils, kidney beans, and soy — that’s why you don’t want to stay on a strict regime for long.

Safer vegetables include bok choy, carrots, cucumbers, eggplant, lettuce, olives, parsnips, potatoes, and turnips. You can eat meat on this diet, along with eggs, fish, and nuts (though steer clear of pistachio and cashews). As noted earlier, you’ll stay away from wheat, rye, and barley but can eat oats (which are not gluten-free unless specified so), corn, quinoa, and white rice.

IBS is linked to anxiety and, research suggests, early life trauma in some people. Difficult experiences can affect your gut, which in turn affects your mood. Your best strategy is to learn which foods cause symptoms in you and avoid them, while also doing your best to create a life that helps you stay calm and upbeat.