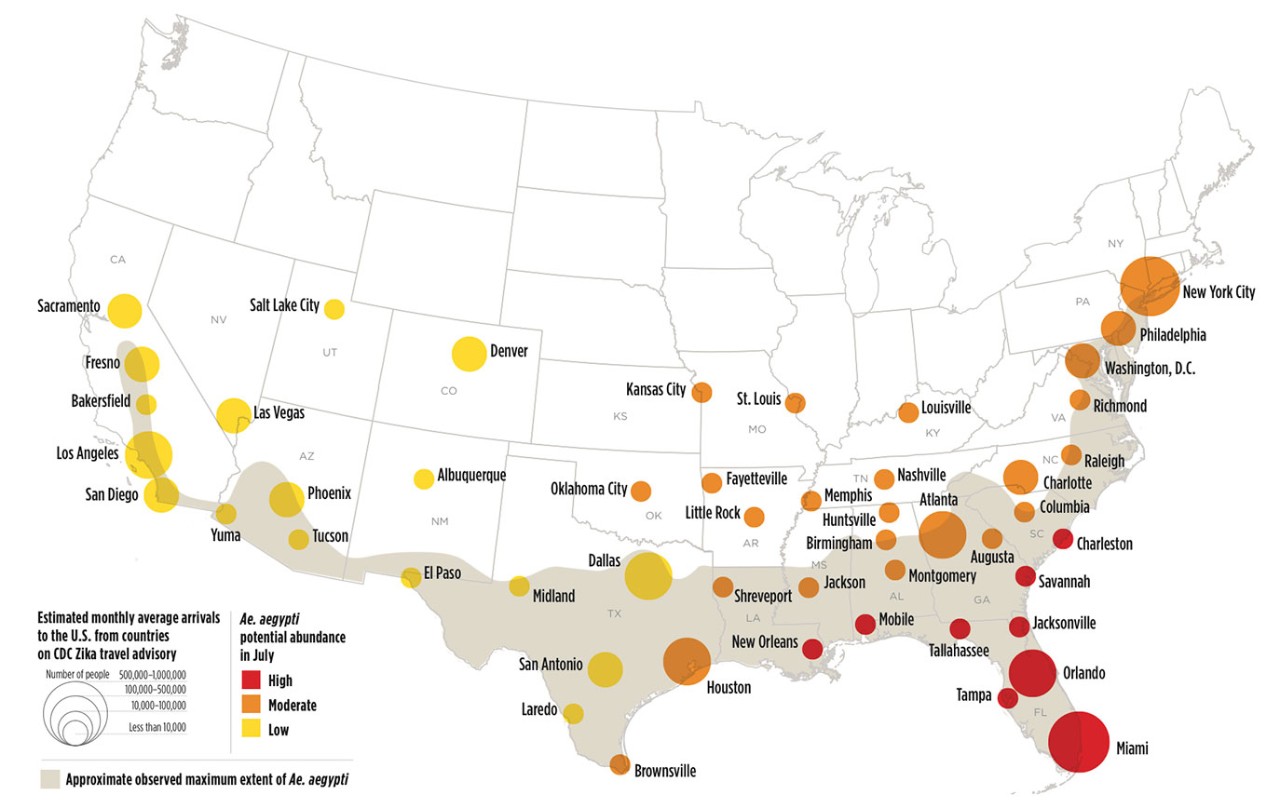 NCAR researchers have estimated the likelihood of mosquitos spreading the virus in 50 U.S. cities, extending from the South up the east coast to New York City and westward to Phoenix and Los Angeles. Cities with a high probability of Zika infection include New Orleans, Mobile, Charleston, Savana, as well as all of Florida.

Researchers are learning more about the Zika virus — including when and where it’s expected to spread in the U.S. — along with dengue fever and other mosquito-borne diseases.

Zika is no longer a troublesome disease far from the shores of the U.S. Over 116 Americans were infected with the virus in the first two months of 2016, according to the Centers for Disease Control and Prevention (CDC). So far, those cases can be explained by people catching the virus from mosquitoes while traveling in countries with Zika outbreaks or by sexual contact with a person who was infected with Zika on a trip outside the U.S.

But that’s expected to change soon. And the Zika epidemic, recognized as a global public health emergency by the World Health Organization (WHO), may become a more direct threat to Americans.

Aedes aegypti mosquitoes, which carry the Zika virus in many Latin America and Caribbean countries, as well as dengue fever and yellow fever, are native to parts of the U.S. As temperatures rise, the insects are expected to multiply and spread, raising the risk of outbreaks here, according to a study headed by mosquito and disease experts at the National Center for Atmospheric Research (NCAR) in Boulder, Co.

Armed with information about Zika, Americans can be prepared for Zika in the U.S. by recognizing symptoms and — most importantly — learning how to prevent infections in the first place.

"Even if the virus is transmitted here in the continental U.S., a quick response can reduce its impact,” said NCAR scientist Mary Hayden, PhD.

What is Zika virus?

Although Zika has been known to cause human infections since l947, it was only after outbreaks in Brazil and other affected countries were linked to growing numbers of birth defects that serious health risks from the virus became evident. While it’s true most people infected with Zika suffer no long-lasting consequences, research has shown it is a serious threat to unborn babies — causing miscarriages, eye problems, and microcephaly, a devastating birth defect marked by a smaller than normal brain and neurological problems.

A recent study suggests one in every 100 pregnant women who contracts Zika during the first trimester will give birth to a baby with microcephaly. Even if pregnant women have only mild Zika virus symptoms, researchers have found the danger to their unborn babies is grave. So far, over 5,600 cases of microcephaly have been connected to the Zika outbreak in Brazil that started last spring.

The virus also appears linked to Guillain-Barre syndrome, an immune system disorder which can sometimes cause paralysis.

"We are learning more about Zika every day. The link with microcephaly and other possibly serious birth defects is growing stronger every day. The link to Guillain-Barre syndrome is likely to be proven in the near future, and the documentation that sexual transmission is possible is now proven,” CDC director Tom Frieden, MD, said in a press briefing.

French doctors recently reported the case of another serious neurological problem, meningoencephalitis (inflammation of the brain and membranes covering the brain and spinal cord), that developed in a man with Zika infection. (Meningoencephalitis is sometimes caused by yet another mosquito-borne illness that appears in the U.S. periodically, the West Nile virus.)

While researchers still are searching for the “smoking gun” that links Zika virus to this and other neurological disorders, a group of scientists and doctors issued a warning in the New England Journal of Medicine that the potential neurological risks of Zika “demand decisive, immediate action to protect public health.”

They urge the WHO’s recommendations for intensive mosquito control, personal protection against mosquito bites, and prevention of Zika virus transmission through sexual contact or blood transfusion be strengthened — at least until scientists learn more.

Where the virus is now

The virus has now been confirmed in 33 countries and territories in Latin America and the Caribbean. And, as the virus continues to spread, the WHO estimates around 4 million people could be infected with Zika over the next year.

Currently, Puerto Rico is an area of “great concern,” according to the CDC’s Frieden. Poverty that’s resulted in abandoned houses, discarded tires that collect water, and a lack of air conditioning in many places, plus a warm, wet climate make the U.S. territory an ideal place for mosquitoes to flourish.

The CDC estimates 80 percent or more of the 3.5 million people in Puerto Rico may be infected with Zika this year. In an interview with The New York Times, Frieden predicted those cases would likely include "thousands of infected pregnant women."

While not a single Zika infection in the U.S. has been traced to a mosquito bite in the states, it seems inevitable that will happen. Using computer simulations to trace weather conditions that support the populations of Zika-carrying mosquitoes, NCAR researchers have estimated the likelihood of mosquitos spreading the virus in 50 U.S. cities, extending from the South up the east coast to New York City and westward to Phoenix and Los Angeles. Cities with a high probability of Zika infection include New Orleans, Mobile, Charleston, Savana, as well as all of Florida.

"This research can help us anticipate the timing and location of possible Zika virus outbreaks in certain U.S. cities," said NCAR scientist Andrew Monaghan, PhD, lead author of the study. "While there is much we still don't know about the dynamics of Zika virus transmission, understanding where the Aedes aegypti mosquito can survive in the U.S. and how its abundance fluctuates seasonally may help guide mosquito control efforts and public health preparedness."

Even if Zika-carrying mosquitoes become widespread in the U.S. mainland, Monaghan emphasized the virus is not expected to spread like it has in Latin America and the Caribbean, thanks in large part to the fact so many Americans live and work in air-conditioned and sealed homes and offices.

How to protect yourself from Zika

The best way to avoid any complications from a Zika infection is, obviously, to not get bitten by a mosquito in the first place. If you have an option, consider skipping or postponing a trip to any area where there are known cases of Zika virus. And if you are a pregnant woman or intend to become pregnant, check for the CDC’s most current list of places to avoid in order to protect your unborn baby.

If you must travel to or live in an area with active Zika transmission, make sure you wear long sleeves and pants, use mosquito repellent, and stay inside, in air conditioning, as much as possible.

The CDC has confirmed Zika has been found in the semen of infected men and can be sexually transmitted, making it crucial that men who travel to regions where the virus is spreading use condoms or abstain from sex if their partner is pregnant or could become pregnant.

Although Zika usually causes either mild or no symptoms in adults, it can produce fever, rash, joint pain, or conjunctivitis (pink eye), according to the CDC. If you believe you may have contracted Zika, contact your doctor. There are no specific treatments for the virus, but blood tests can confirm if you do have the infection.

Removing mosquito habitats is important to lower the odds of Zika transmission. Make sure there’s no standing water in rain gutters, old tires, buckets, plastic covers, toys, or any other container where mosquitoes can breed around your yard. Water in bird baths, fountains, wading pools, rain barrels, and potted plant trays should be changed at least weekly to destroy potential mosquito habitats, according to the Environmental Protection Agency.

By protecting yourself from mosquito bites, you can do more than prevent Zika virus symptoms. It turns out that other continent-jumping viruses carried by mosquitoes — including dengue fever, yellow fever, and chikungunya — are on the rise, too. In 2007, there was an outbreak of chikungunya (which causes fever and joint pain) in Italy and another outbreak in the Caribbean in 2015.

There are several strains of dengue, which has sickened some residents of Key West, Fla., in recent years. The virus frequently produces flu-like symptoms including headache, fever, and joint pain. But it can be fatal. In fact, dengue is a leading cause of illness and death in the tropics and subtropics, according to the CDC. Dengue has been reported in Hawaii in 2015 and 2016.

In areas where groups of people develop symptoms of a viral infection — especially if it seems a large-scale outbreak is occurring — public health officials can find out exactly what infectious agent could be the cause. A new, high-tech, three-in-one laboratory test that quickly reveals if a person is infected with Zika, chikungunya, or dengue was recently approval by the Food and Drug Administration (FDA), according to the CDC.

Kits containing the Trioplex Real-time RT-PCR Assay test won’t be available yet to primary care doctors or hospitals. Instead, they are being sent to the Laboratory Response Network, a group of U.S. and international labs that responds to public health emergencies involving possible epidemics.

While Zika remains a serious, potential health threat for thousands of people, there’s reason to believe the virus will one day be eliminated. For starters, scientists are making progress developing a vaccine to prevent the infection. And potent new ways to stop Zika-carrying mosquitoes are also on the horizon.

Finding a way to permanently get rid of most Zika-spreading mosquitoes would be a critical step in defeating the virus. That may be possible, thanks to a genetically engineered Aedes aegypti mosquito developed by Oxitec. The male mosquitoes are modified so their offspring die before they are old enough to reproduce.

The FDA has ruled these genetically tweaked insects don’t present any harm to the environment, so Oxitec is developing an investigational trial in the Florida Keys, where mosquitoes are common, to see how effective this strategy will be in the U.S. fight against Zika. (Keep in mind, however, the introduction of bugs to control other pests can have unintended effects.)

Oxitec has already seen positive results after releasing their altered mosquitoes in Brazil, Panama, and the Cayman Islands. Tests showed the genetically altered insects suppressed more than 90 percent of the Zika-carrying mosquito population.