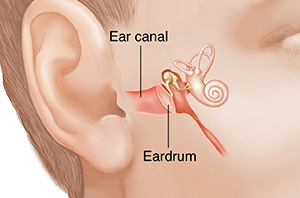 Impacted earwax is a buildup of the natural wax in the ear (cerumen). Impacted earwax is very common. It can cause symptoms such as hearing loss. It can also make it difficult for a doctor to examine your ear.

Tiny glands in your ear make substances that combine with dead skin cells to form earwax. Earwax helps protect your ear canal from water, dirt, infection, and injury. Over time, earwax travels from the inner part of your ear canal to the entrance of the canal. Then it falls away naturally. But in some cases, it can’t travel to the entrance of the canal. This may be because of a health condition or objects put in the ear. With age, earwax tends to become harder and less fluid. Older adults are more likely to have problems with earwax buildup.

Earwax can build up because of many health conditions. Some cause a physical blockage. Others cause too much earwax to be made. Health conditions that can cause earwax buildup include:

Objects repeatedly placed in the ear can also cause impacted earwax. For example, putting cotton swabs in the ear may push the wax deeper into the ear. Over time, this may cause blockage. Hearing aids, swimming plugs, and swim molds can cause the same problem when used again and again.

In some cases, the cause of impacted earwax is not known.

Excess earwax usually does not cause any symptoms, unless there is a large amount of buildup. Then it may cause symptoms such as:

In rare cases, some treatments for earwax removal may cause complications such as:

Talk with your healthcare provider about which risks apply most to you.

Healthcare providers do not advise use of ear candles or ear vacuum kits. These methods are not shown to work and may cause problems.

Call your healthcare provider if you have symptoms of impacted earwax. Also call right away if you have severe symptoms after earwax removal. These may include bleeding or severe ear pain.