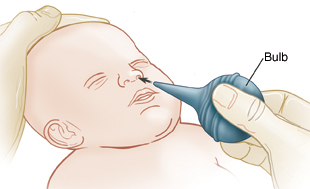 Babies can only breathe through their noses (not their mouths). So when your baby’s nose is stuffed up with mucus, it’s much harder for him or her to breathe. When this happens, use saline nose drops or spray (available without a prescription) to loosen the mucus. You may also use a bulb syringe to clear out your baby’s nose.

Babies sneeze to clear germs and particles out of the nose. This is a natural defense against illness. Sneezing every now and then is normal. It doesn’t necessarily mean the baby has a cold.

Hiccups are normal and babies don't seem bothered by them. Breastfeeding or sucking on a pacifier may help get rid of the hiccups. If not, don’t worry. They’ll stop on their own.

When to call your child's healthcare provider

An occasional sneeze or stuffy nose usually isn’t a sign of a problem. But if these happen often, they could mean the baby has a cold or other health problem. Call your baby's healthcare provider if your baby: