Here are some answers to frequently asked questions about bile duct cancer.

What is bile duct cancer?

Bile duct cancer is a rare type of cancer that starts in the bile duct. Like most cancers, it is named for the body part in which it began. If cancer cells are found in other parts of the body, the cancer has spread. This is called metastasis.

What are bile ducts?

The bile ducts are thin tubes that extend from the liver to the small intestine. Their purpose is to transport bile. Bile is a fluid made in the liver that breaks down fats during digestion. The liver secretes bile that is then stored by the gallbladder. The liver and gallbladder are connected to each other and to the small intestine. During meals, the gallbladder releases bile through the bile duct system to help with the digestion of food in the intestines. Two areas of the bile duct system are involved in this process: 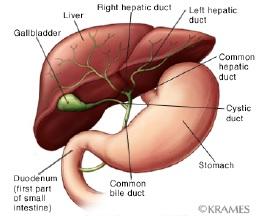 What are the risk factors for bile duct cancer?

Healthcare providers are not sure exactly what causes bile duct cancer, but there are some possible risk factors:

What are the symptoms of bile duct cancer?

People with bile duct cancer may not have any symptoms during early stages when the cancer has not spread. People with this type of cancer may have any or all of these symptoms:

These symptoms may or may not mean a person has bile duct cancer. A person who is having them should see a healthcare provider right away.

How is bile duct cancer diagnosed?

Should everyone get a second opinion for a diagnosis of bile duct cancer?

How can someone get a second opinion?

There are many ways to get a second opinion:

How is bile duct cancer treated?

Surgery to remove the tumor is the only way to cure this type of cancer. A cure may be possible if the cancer is found early enough. Radiation may be used before or after surgery. It may be used by itself to ease symptoms if surgery is not possible. Chemotherapy may be used, but has not been shown to be as effective in treating this cancer. It may be given either with radiation or by itself in people with bile duct cancer who are not candidates for surgery. Liver transplant may be a choice for selected patients.

Cancer research should give you hope. Healthcare providers and researchers around the world are looking for and studying ways to prevent, detect, and treat this cancer.

Many new drugs are being studied in use with traditional treatments.

Researchers are also studying the use of hyperthermia (heating the body to cause a high fever) in combination with certain chemotherapies to treat inoperable extrahepatic bile duct cancers.

What are clinical trials?