When your body is working normally, the food you eat is digested and used as fuel. This fuel supplies energy to the body’s cells. When you have diabetes, the fuel can’t enter the cells. Without treatment, diabetes can cause serious long-term health problems. 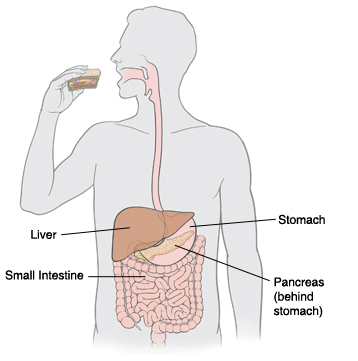 How the body gets energy

The digestive system breaks down food, resulting in a sugar called glucose. Some of this glucose is stored in the liver. But most of it enters the bloodstream and travels to the cells to be used as fuel. Glucose needs the help of a hormone called insulin to enter the cells. Insulin is made in the pancreas. It is released into the bloodstream in response to the presence of glucose in the blood. Think of insulin as a key. When insulin reaches a cell, it attaches to the cell wall. This signals the cell to create an opening that allows glucose to enter the cell.

When you have type 2 diabetes

Early in type 2 diabetes, your cells don’t respond properly to insulin. Because of this, less glucose than normal moves into cells. This is called insulin resistance. In response, the pancreas makes more insulin. But eventually, the pancreas can’t produce enough insulin to overcome insulin resistance. As less and less glucose enters cells, it builds up to a harmful level in the bloodstream. This is known as high blood sugar or hyperglycemia. The result is type 2 diabetes. The cells become starved for energy, which can leave you feeling tired and rundown.

Why high blood sugar is a problem

If high blood sugar is not controlled, blood vessels throughout the body become damaged. Prolonged high blood sugar affects organs, blood vessels, and nerves. As a result, the risks of damage to the heart, kidneys, eyes, and limbs increase. Diabetes also makes other problems, such as high blood pressure and high cholesterol, more dangerous. Over time, people with uncontrolled high blood sugar have an increase in risk of dying of, or being disabled by, heart attack, heart failure,  or stroke.